<
>
Arrival in Tanzania
On arrival at the airport you will be personally met and escorted by one of our guides to your accommodation. Here you will have the rest of the day at Leisure. Later in the evening you will meet our guide who will brief you on next day’s activities and tips for the Safari.

Day 1: Arusha – Bike tour - Lake Manyara – Mto wa Mbu
After breakfast we will start our bike tour at around 8:30 am. We will cycle to Lake Manyara and while we are on the way we will be able to see different kinds of birds as Lake Manyara is famous for its variety of bird species, your guide will be identifying them and the type of vegetation found, you will also see banana plantations and if we are lucky we may see Baboons and Monkeys. On the way the guide will be explaining how the Lake was formed and the ecological importance of the Lake to the wildlife found on the area. We will also pass through a migration corridor for the animals shifting from Tarangire National Park to Lake Manyara following water and green pastures. After reaching the Lake you will be able to take short walk to the near shore and you will be able to see some animals like Wildebeests, Thomson, Gazelle, Zebras, Baboon, Monkey and Giraffe, also Birds like Grey Heron, Marabou stork, Egret and many other species on the near vicinity.
We will later return to the lodge for a hot Lunch then get into the Safari vehicle where we will travel for 5 minutes to the Great Rift Valley and the Lake Manyara National Park. The Lake Manyara National Park is one of Tanzania's most dramatically located African wildlife areas, consisting of a massive but shallow soda lake (covering two-thirds of the park) at the foot of the Great Rift Valley's western escarpment. The park's varied habitat attracts a wide variety of animals, including one of Africa's densely populated African elephants herds, Lake Manyara's famous tree-climbing lions, as well as large flocks of flamingos, attracted by the algae in the lake. We will enjoy a picnic lunch inside the park and do two exciting morning and afternoon game drives, in search of the tree-climbing lions. Late afternoon we depart for Mto wa Mbu at the previous night Tented Lodge for dinner and overnight.

Day 2: Mto wa Mbu - Eyasi - Karatu
After breakfast, drive from Karatu campsite to Lake Eyasi, Arrive at Lake Eyasi and visit the Hadzabe people who are one of the last remaining hunter-gatherer tribes in Africa and have a population of less than 1000 people. You will have the opportunity to make a rubbing stick fire using the hand twirling method, spend the next hour or two hunting with the Hadzabe, using only bows and arrows and hunting dogs. Return to their camp to participate in a dance. Finally before parting you will have a lesson in archery using the Hadzabe’s hand crafted bows and arrows. Dinner and overnight will be as per standard and type of accommodation option requested.

Day 3 Mto wa Mbu – Ngorongoro Crater – Serengeti
After breakfast we depart to Ngorongoro Conservation area while also doing a game viewing on the way. We arrive in time for lunch, after lunch we will descend over 600 meters into the crater to view wildlife for a half day's safari tour. Supported by a year round water supply and fodder, the Ngorongoro National Park supports a vast variety of animals, which include herds of wildebeest, zebra, buffalo, eland, warthog, hippo, and giant African elephants. Another big draw card to this picturesque national park, is its dense population of predators, which include lions, hyenas, jackals, cheetahs and the ever-elusive leopard, which sometimes requires a trained eye to spot. We will visit Lake Magadi, a large but shallow alkaline lake in the southwestern corner, which is one of the main features of the crater. A large number of flamingos, hippos and other water birds can usually been seen here.
We will have our lunch here before a finalizing our adventure with a picturesque Crater Rim walk. The walk is along the Western rim of the Crater past the Oloirobi viewpoint. There are patches of forest to begin with and later it opens up into thicket and grassland, giving beautiful views down into the Crater on your right and eventually equally good views towards Olduvai Gorge, the Serengeti and the Gol mountains to your left. This is an easy-paced walk with no arduous climbs, just a few short gradients. It lasts about 2 hours. After this we will Ascent the crater. Dinner and overnight will be as per standard and type of accommodation option requested within the Ngorongoro Conservation Area.

Day 4 Ngorongoro - Serengeti Plains
Early in the morning after breakfast, leave the lodge and drive to Serengeti while doing an Early morning game dive while entertained by the beautiful scenery provided by the sunrise from a distance.. After entering Serengeti we will continue our game viewing along the Sogore River Circuit, which loops into the plains south of the Seronera River, and which is good for possible Lion, Thomson gazelle, topi, ostrich and cheetah sightings. In the afternoon we will return for a hot lunch and a one hour rest. After this we will follow the Kopjes Circuit, which goes anti-clockwise around the Maasai Kopjes, which usually attract a number of lion and some formidably large cobras. Kopjes are weathered granite outcrops, scattered around the plains, most of which are miniature ecosystems, providing shade and drinking water in pools left in the rock after the rains. This makes the kopjes particularly good for spotting wildlife in the dry seasons - including lions, which like to lie in wait for animals coming to drink! Dinner and overnight will be as per standard and type of accommodation option requested.
Extra tour recommended: A One hour Balloon Safari in the Serengeti Plains

Day 5 Serengeti - Arusha
Early in the morning after breakfast. We will start our drive back to Arusha while doing a game drive along the way. You will reach the Ngorongoro Conservation area in time for lunch, after lunch at a picnic point you will travel back to Arusha where we will end our African safari adventure. 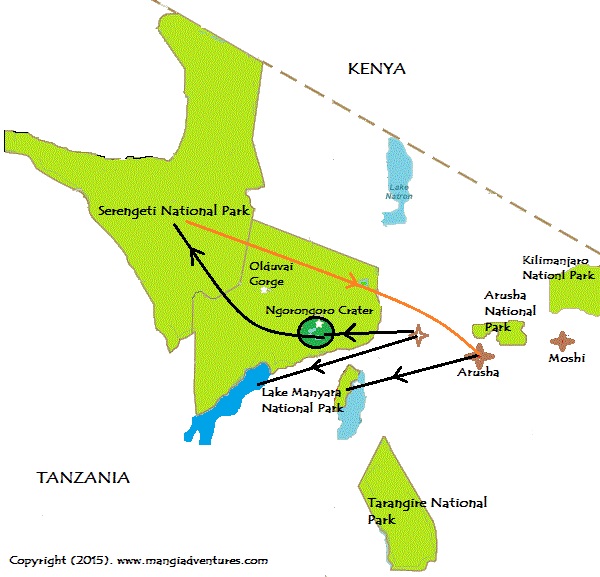 Included in this package
Please Note: Most dietary requirement can be catered for. Please inform us of any specific dietary requirements and these will be communicated to the lodge which will provide you with accommodation during Safari

Not included in this packageClick here to see your Safari Checklist